Over a year ago, I tried launching a Q&A forum called UKnaWAH to enable Nigerians in the UK share information about living in the UK. The first problem was how to get people off Facebook to participate. I reasoned the easiest way would be to integrate Facebook connect.

Well, I was wrong.

I posted my first test question asking how I could buy cheap tickets to Nigeria. It  was subsequently shared on Facebook. The responses came quick 10 of them. 0 on my Q&A site, 10 on Facebook.

The bigger problem was, and still is, getting the responses out of the walled Facebook garden! 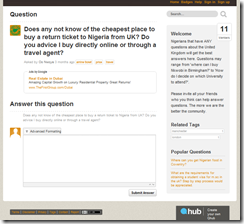 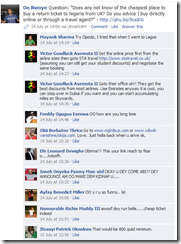 I immediately stopped putting any effort on UKnaWAH as it became obvious the best answers would end up on Facebook.

This loss of comments also happens in my blog posts where I lose about 10 comments to Facebook for every post. I can only imagine the millions of YouTube comments that have been lost to Facebook.

Comments out of context make no sense therefore the original posts deserve their comments. At least a duplicate.

But there is a solution