Earlier today, I was reading comments on Hacker News discussing the decline of traffic on Google Plus. When Google Plus launched, people (including myself) thought it would give Facebook a really though time considering it had many vital features missing from face book Facebook.

Rather than build up momentum on what they had started by updating features (linking the mobile Huddle to GTalk) and letting more people in, Google was more concerned about getting the real names of people and punishing people on Gmail for offenses committed on Google Plus.

While Google was busy doing that, Facebook was thinking of different ways to regain momentum. They released Messages, the Skype integration and I said ‘meh’. Yesterday, I heard they released a feature that allows you to subscribe to people. I was not too impressed because ‘unresponded’ friend request acted as subscription. And my settings is such that non-friends can comment on my status. So to me it was not a big deal.

Then I saw this. 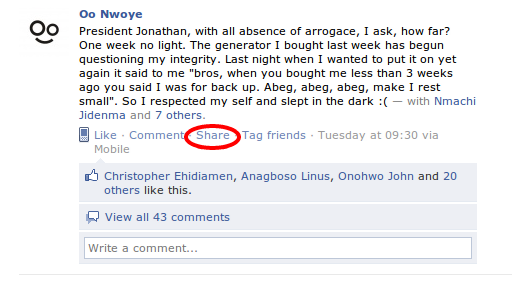 Being able to re-share text is such a big deal that you will not understand its implication. In simple terms, your ‘witty words’ can spread far beyond you. That is the single thing that made Twitter VERY powerful. Making words go viral. The only difference is that unlike in Twitter and Google plus, you do not need to struggle to get a following.

So as it is, Gaddafi has a greater chance for a comeback than Google Plus. Difficult? yes. Impossible? No

But hey, it is rumored that the aim of Google plus is to force Facebook open. If that is the case, Google might be happy with Facebook’s ‘progress’

7 thoughts on “Dear Google Plus, Facebook has Struck Back. It May Be Over!”