True Story: 3 Coffins And A Doll


Nope, this is not the title of a Nollywood movie but the Story of my Friday and Saturday in UNIBEN. 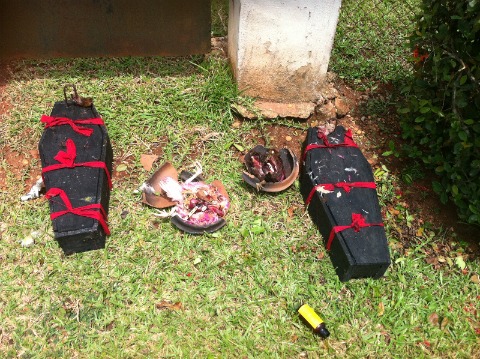 Front of My Mum's House

A brief back story. If you have been reading the news, you would know that there has been a conflict in UNIBEN between the past Bursar Dr. May Nwoye (my Mum), and the current Vice Chancellor, Prof Oshodin. The problem has been on for months but I never mentioned it before because I understand there is always internal politics and conflict in any large organization. Even when my mum was receiving death threats, I kept quiet.

As any Nigerian campus child knows, anytime there’s a change in personnel in principal positions (Bursar, VC, Registrar, Provost of Medicine etc ), threats are received, names are sullied, alliances change, and then peace returns. The children of the parents ignore it all.

So on my way to the Village on Thursday, I passed through Benin, saw my Mum asked her “how far?” and if things had settled down” She said everything was quiet so I continued my journey to the east where I want to attend a burial.

I was woken up on Friday morning to be told coffins had been deposited at our gate on campus. I had to return home immediately as my mum was alone at home (my dad was in the village for the burial of his sister).

When I got back with my dad, I saw the coffins. It was annoying at first before being embarrassing. In 2012 when Google is doing self driving cars, coffins are being used to fight battles.

Anyway, we reported to the police as a matter of formality. The UNIBEN security was called in but they did not come. I was told that there were three coffins at first but a UNIBEN security van came and took one away (yup, it is that ridiculous).

A priest came and we burnt the sacrifice and the day continued normally.

Slept, woke up and say another coffin right inside the compound in the front door of the house.  Now that has made me really angry as it has become really deadly as their next stop would be inside the house or my mums room? 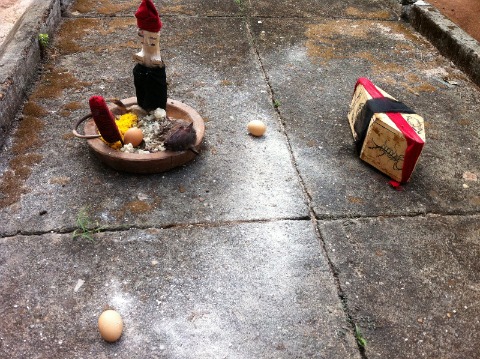 My mum and dad have given the University of Benin 57 years between them. So it is absolutely an unacceptable way for them to be treated as they wind down their service to GREAT UNIBEN. I really do not mind internal political battles over the years, I have seen them come and go and never gotten involved. But physical threats are another thing. They are certainly new.

I no send jazz at all but physical harm cannot be reversed. The number of people that have been killed and kidnapped in Benin (several on campus) makes me really worried for the lives of my parents.

The fact that the Vice Chancellor Prof. Oshodin and the CSO have not visited the site right on campus after several days says a lot.

If anything happens to my Mother, Father or myself, we all know who is responsible. However, I would rather avoid anything happening than to try to seek “justice” if that exists.

Thanks for reading and please pass it on (RT, BBM, FB, etc.). If you think you can be of help, please contact me [email protected]    I will appreciate it. Some people have boasted that “nothing go fit happen” but I know that the co-ordinated grassroot can win any battle.

PS: I am just pissed that instead of writing about GBEDU.FM, Google, Spotify,  the music industry, Mobile broadband penetration in Africa etc, I am here talking coffin, sacrifice and juju. I tire! All I can do is file this under WTF?!!!